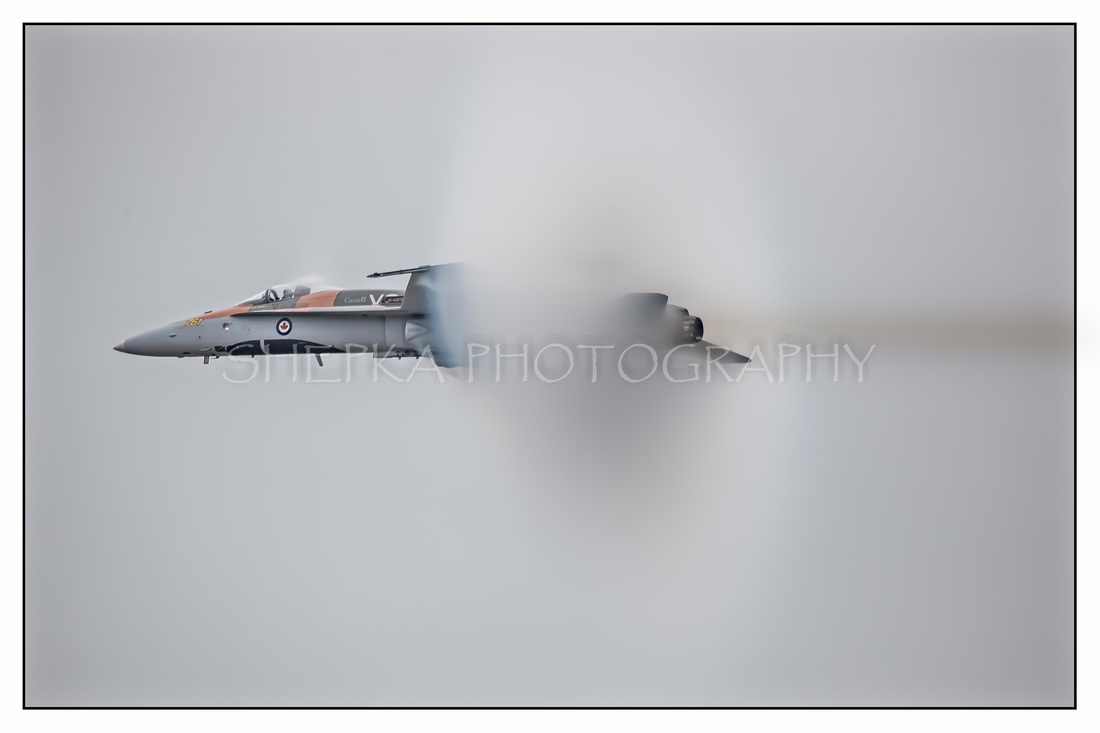 This image was literally years in the making as I have tried on multiple occasion to capture this 'vapor cone' effect without much success. Most casual observes often believe this effect to be the result of breaking the 'sound barrier', but I can attest that this was not the case here. I was fortunate to finally capture this image of a Royal Canadian CF-18 'Hornet' making a high-speed, low level pass during a period of very high humidity - creating this awesome 'vapor cone' effect. Travelling at nearly the speed of sound, the water vapor is condense via pressure resulting in multiple 'halos' appearing for just a split second. So fast, it is nearly impossible to capture it with a camera. You can even notice a small condensation trail just over the pilots head.

I was only able to fire off 4 images as it was nearly impossible to acquire 'focus lock' since the aircraft was moving so fast. However, once I did acquire 'lock', I tried to time my shutter release to the very instant the 'cone' appeared. Honestly, I though I has missed it again but there is an old saying in the photo world - 'If you didn't see it happen in the viewfinder - you probably captured the image'!  WHY is that you ask, well - the shutter opens for a split second and the viewfinder then goes black as the mirror moves out of the way to allow light to hit the sensor/film. So if you did see that 'moment in time' - you didn't catch it on the sensor/film.  In this case, I timed it perfectly!!

And on a side note, ever wonder why the aircraft is painted the way it is? Well, if your looking from the ground up, the color blends with the sky. If you are looking down from above, it blends with the forest - and we know Canada has a lot of that!

So the moral of the story is or as Winston Churchill once said - 'Never, Never, Never - give up!'

I am off to my next conquest - stay tuned!