The NHRA New England Nationals were held this past weekend in Epping, NH and I am always up for the challenge of capturing imagery of these incredible machines. When you consider they accelerate from 0-100 mph in less than .08 seconds, and to over 320mph in 1000' in under 4 seconds (yes, you read that correctly), the challenges and excitement are many.

Just think about that for 4 seconds - they accelerate to over 320 mph by the time you read this simple line of text - yup, that is crazy fast!

So from a photographic perspective, it is very difficult to capture a clear image of these cars for a whole lot of technical reasons - speed, sound percussion (your body literally vibrates) from the air flowing over the cars and heat from the exhaust pipes which act like jet exhaust, heat and vapor wakes (like the kind you see on the highways in the summer), coupled with changing lighting conditions and the like, well - you get the idea.

So below is my attempt at some of the action with the narrative - hope you enjoy viewing/reading as much as I enjoy producing the imagery.

And as always, feel free to leave a comment ;) 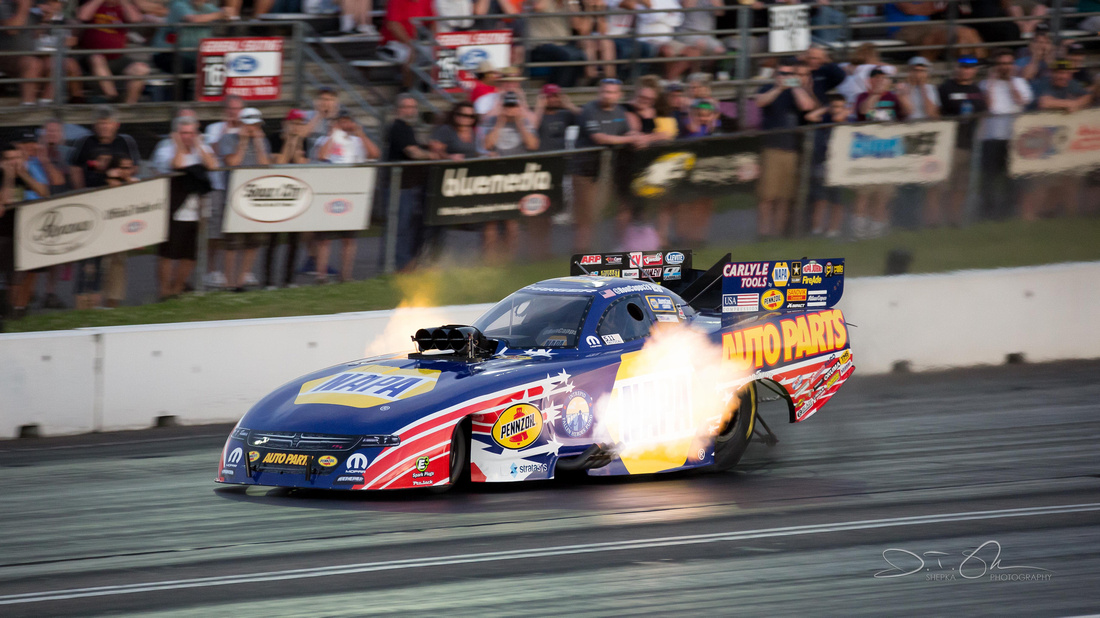 Nitro Methane Harley - 215 MPH @ 6 seconds! Bikes are designed to carry the front tire off the ground for the entire run. The rider shifts their weight to keep it straight down the track - say what!?!?! 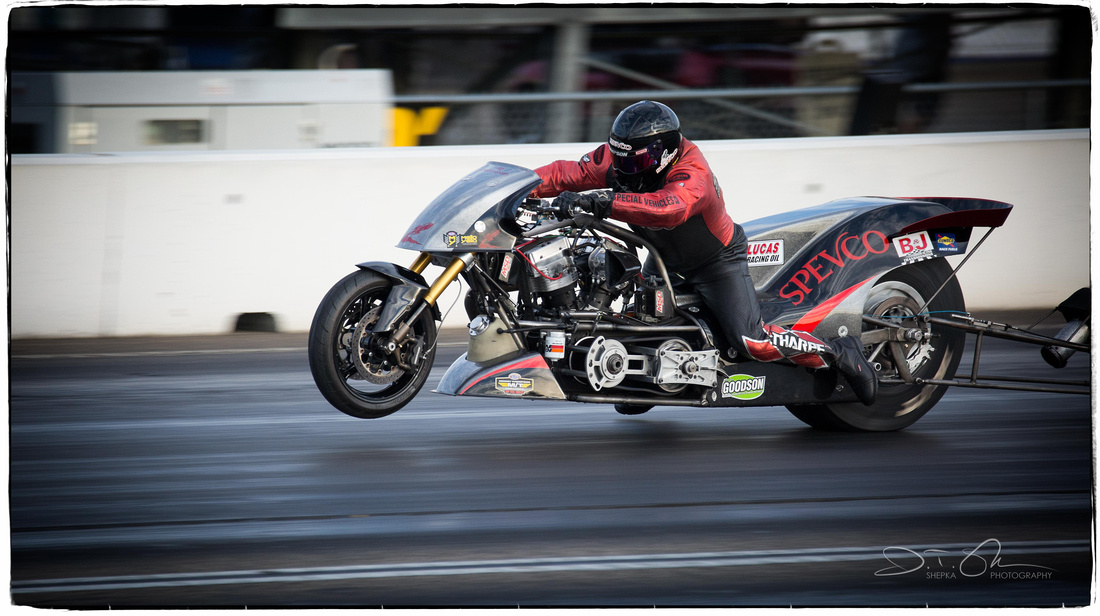 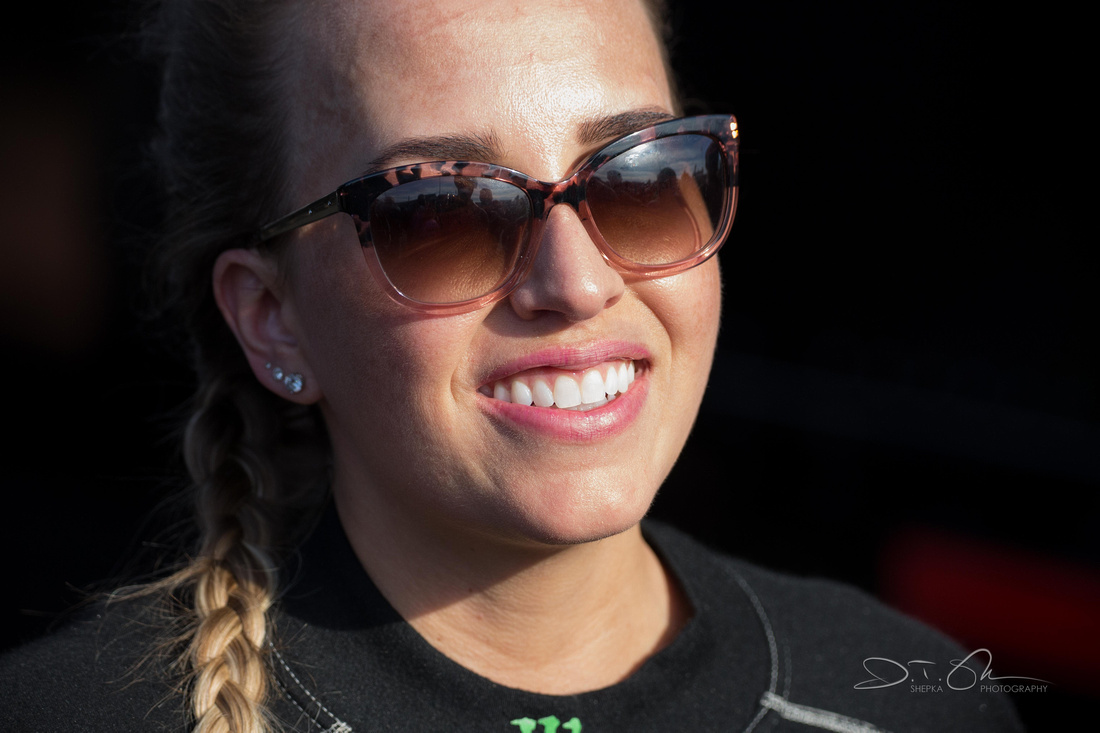 Leah Pritchett - 'Papa John's' Dragster. She is mixing a batch of nitro methane for her next run. This fuel makes things go boom! 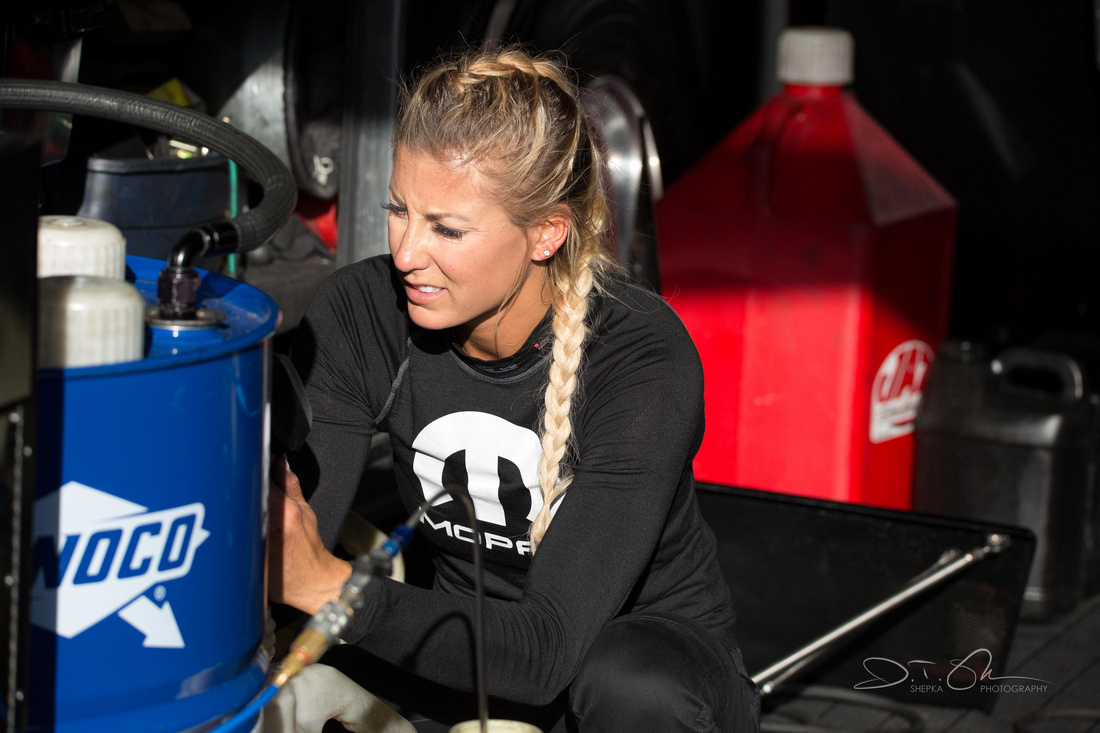 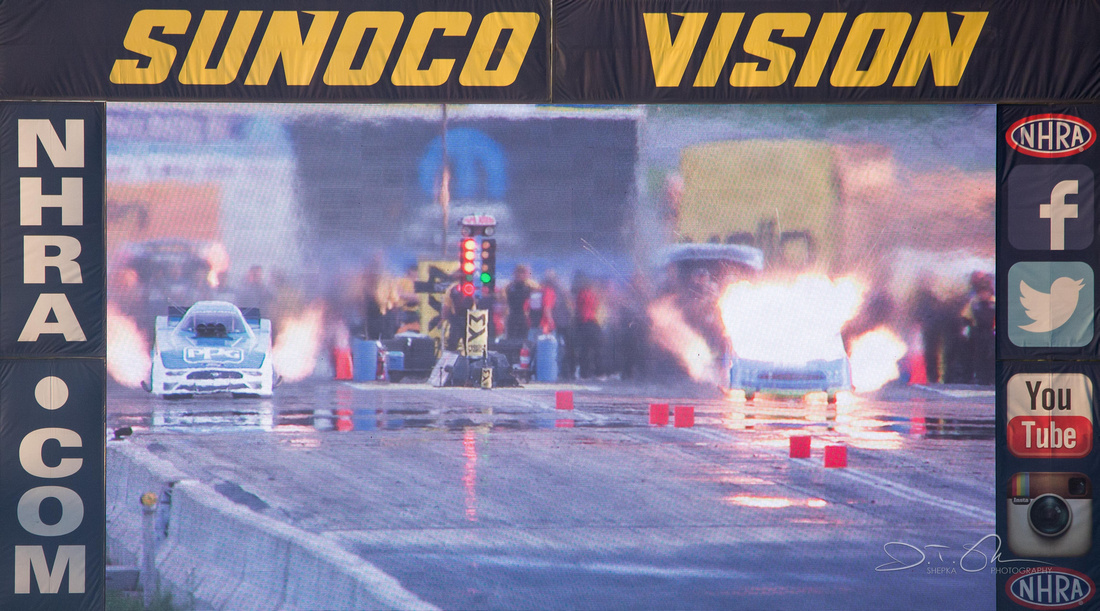 The aftermath of catastrophic engine detonation as a Funny Car crossed the finish line - and a very expensive hit to the bank account. Thankfully the driver walked away! 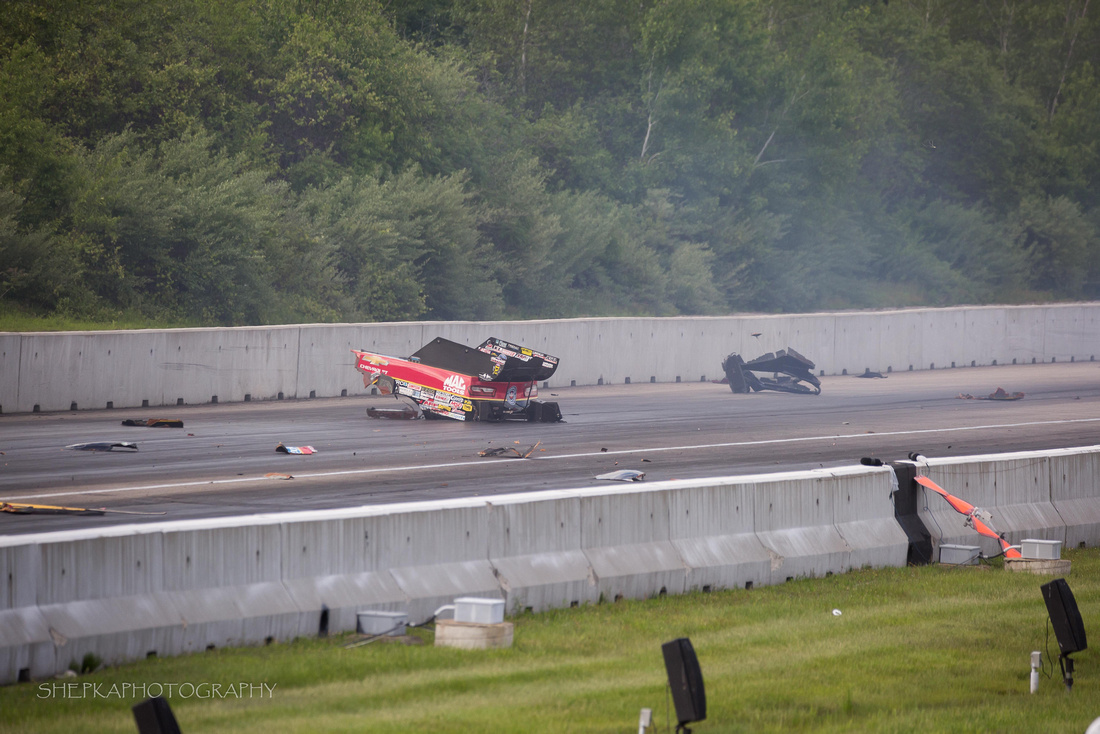 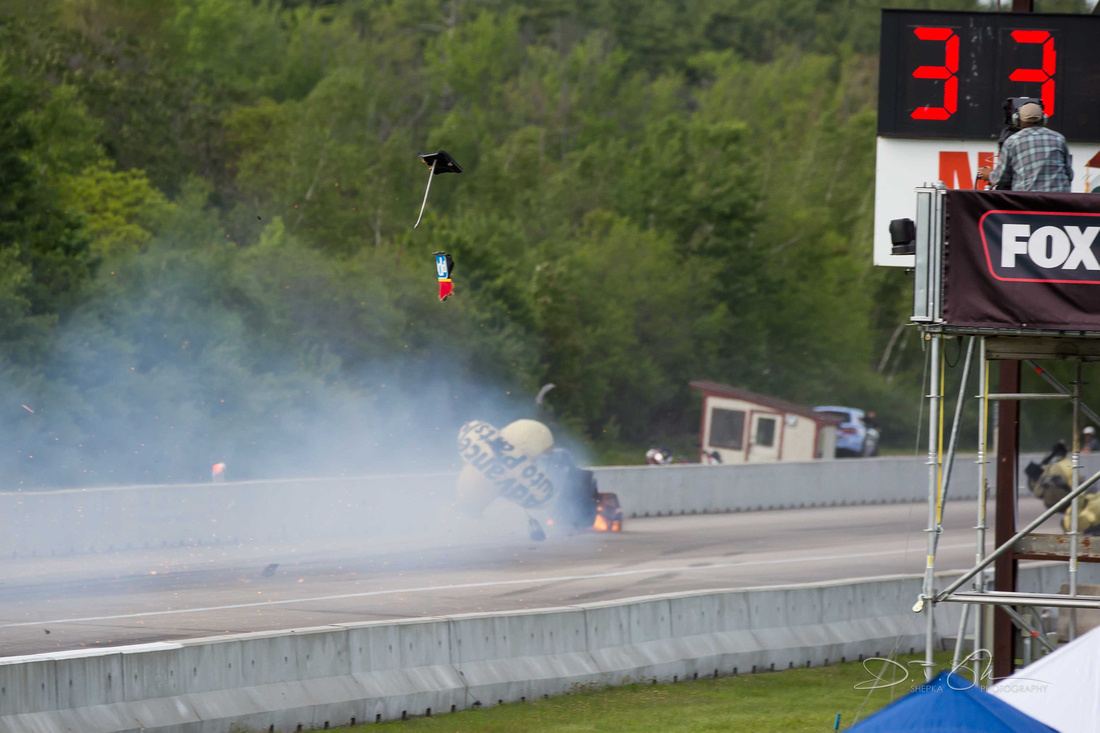 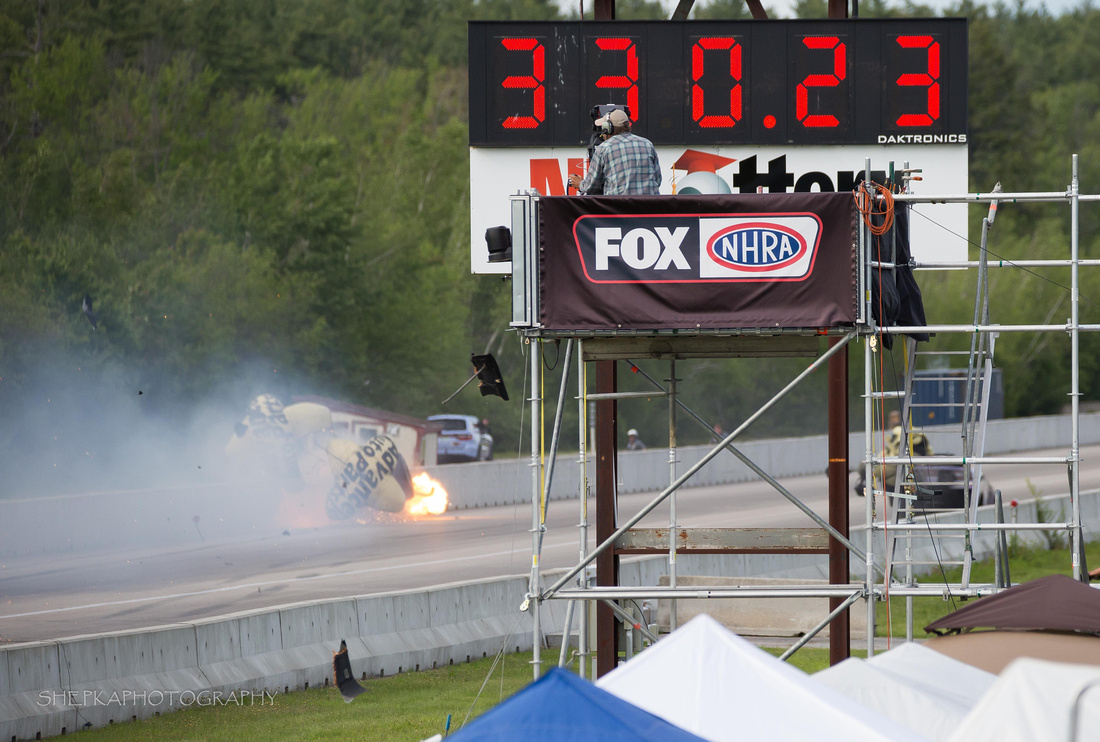 A set of racing slicks goes for just shy of $2k and lasts a whopping 1.5 miles - aka 6 runs down the track. The cost of an average run for Funny Car and Top Fuel is around $20k per run! 20 gallons of nitro methane are forced into the engine, as well as large volumes of air via the supercharger on top of the motor, creating in excess of 10,000 horsepower (an average car is around 200 HP, for comparison sake).  Coupled with barometric air pressure and a few other factors, there is a unique science and art to the power equation the engine tuners have to constantly adjust for optimum performance. Motors, tires, clutches, fuel and sometimes a complete body are rebuilt or replaced every run and have to be completed within the 60 minute allotted time frame between runs. SO, next time you bring your car in for an oil change and tire rotation, you have a right to complain if it takes longer than 30 minutes! 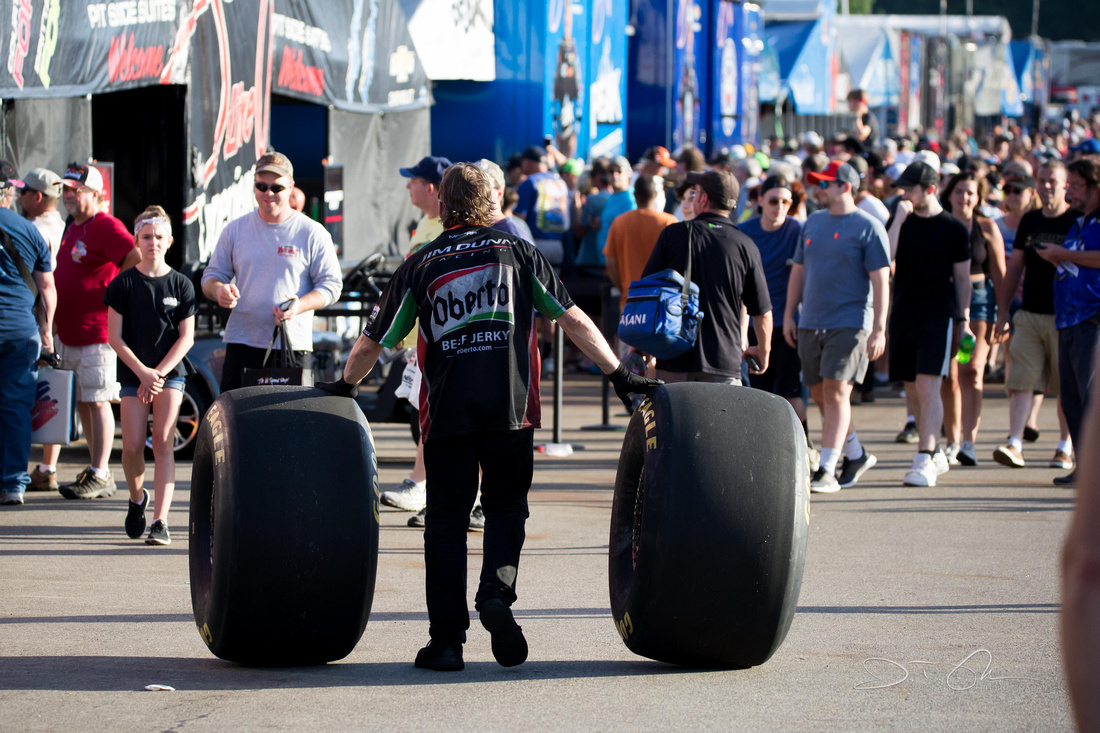 The quiet contemplation before the rush of adrenaline and speed. 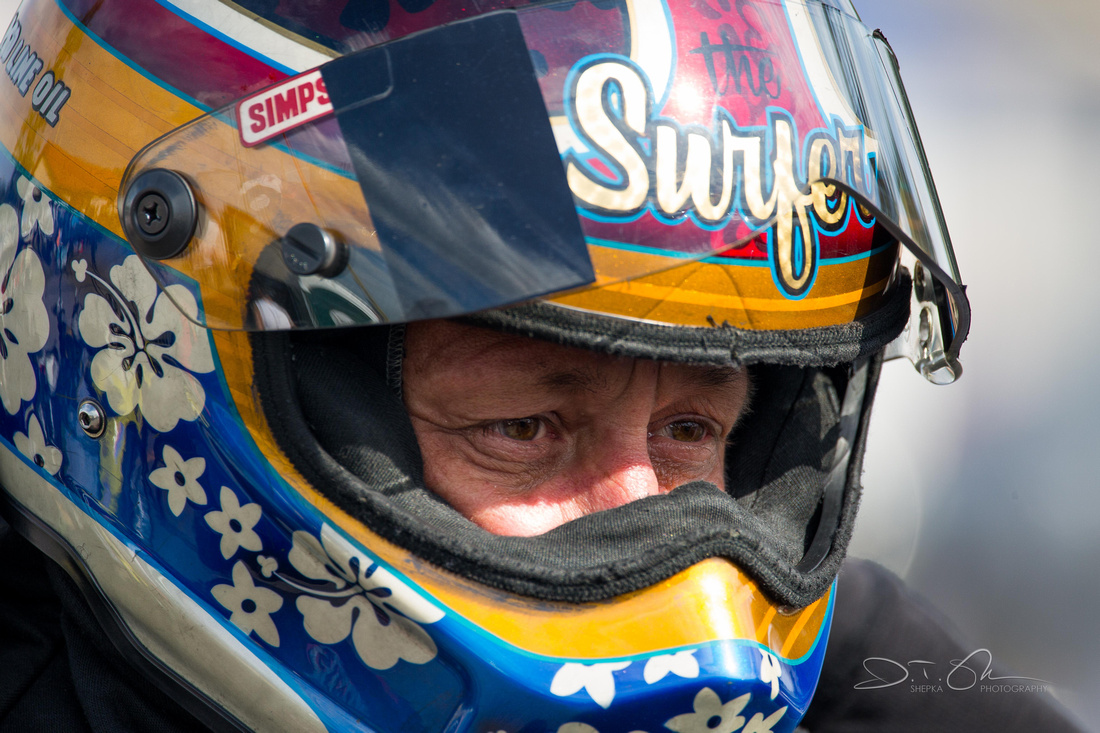 And a moment of reflection with a faith based official who is present at all events. An RFC representative (Racers for Christ - see his lanyard) takes a moment with a driver before suiting up to have a quiet moment with their maker. This is a very dangerous sport and this is nice to see. 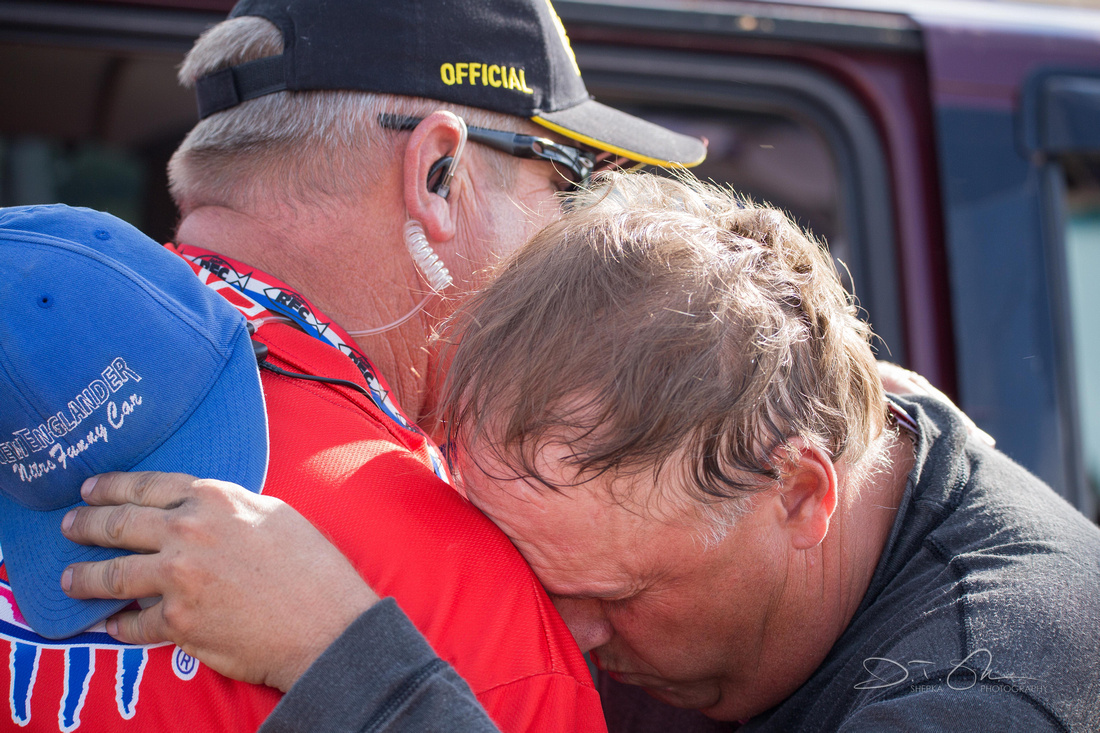 This is Alexis Dejoria (daughter of Patron Tequila owner) and her husband, Jessi James sharing a moment before strapping into her 10,000 horsepower Funny Car . Yes, that JJ who was married to Sandra Bullock. Alexis recently retired from the sport.

Drivers strapped in and waiting at the starting line for their heat race.

The chassis of a Top Fuel Dragster actually flexes in the middle due to the extreme downforce on the front and rear wings compressing the tires into the track surface. The rear tires 'grow' in height as the car accelerates (note the prior image of tires in the pit area and how wide they are). There is only 6 pound of air pressure in them so as the car increases in speed, the wide tire now grows and narrows reducing drag (contact area with the track surface) and also acts like a 'gear effect' as these cars do not have a transmission. All that is figured into the equation to achieve maximum performance. These cars are also equipped with data logging electronics which map a ton of different data elements so the crew chief (more like an IT rocket scientist) can review the data after each run and adjust according to track and weather conditions. Track temperature and barometric pressure are key components to fuel mixture calculations. Nitro Methane is very volatile, you have to control the amount of 'boom' to be successful.

Don't waste your time looking back, we're not going that way.